An Opinion on Skating Toys Redux

In Re-Volt related communities, Skating Toys has definitely become one of the most controversial tracks. Because of this, the author, zorbah decided to create a "redux" version of the track, which was released at the beginning of August.

The track has improved a lot, however, I do feel that some aspects of the original version were better than the new one. I'm gonna go over my first impressions step-by-step. I'd like to add that this is an opinion, and it contains subjective points.

Let's begin with this one, since this is the most noticeable improvement that I think mostly everyone can agree with. The original version of the track used blinding, really bright images for the textures, which could be very annoying to the eye while driving. The environment was also very simple, which was decent enough for racing, but nothing out of the ordinary. The redux version improved... well, basically every aspect of it. The skating section is now darker, and it is much more soothing for the eye. The skatepark also includes graffiti, which is not only a nice decoration, but can be used as a reference while driving. Speaking of that arguement, more arrows have been added which make the directions clear for new players. In retrospect, this is necessary. On the inside of the house, the ground shines with newfound reflections, which fits that part really well. One of the coolest visual additions is a new finish line, which I feel is one of the most important signs on all tracks. And last, but not least: the visiboxes got fixed, which means that parts of the track aren't invisible from certain sections anymore! 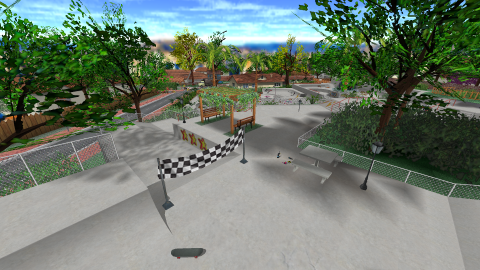 One of my (and many other people's) biggest complaints was the fact that the first 2 ramps suffered from collision-related issues, which meant that the cars could flip while just naturally driving. This seems to be resolved based on about 15 laps of testing. Apart from this, the biggest adjustment in the collision was on the last, dirt-based section of the track. It used to be a lot bumpier, now it is a lot smoother, and it feels a lot nicer to drive. While it can be argued that this takes away from the challenge (which it kinda does), the flow feels a lot better, so it was definitely worth changing. Another interesting change was the fact that bushes no longer have collision, which is rather a positive in my view. However, at some sections, you can cut through the bushes, which feels kind of weird.

Moving on to the most important part of them all, the factor that makes a track good and bad. I should go through the changes in the order they appear on an actual lap. Just a note that this will be the most subjective part of this article, since I've seen many different views on the whole racing line.

1. The Ramp leading out of the Skating Park

In the first few turns, the raceline is completely the same as in the previous version, only the collision was changed, as mentioned before. The first significant change comes right at the end of the skatepark section, which used to be a tight ramp. Now this ramp has been made to be a lot wider, and I feel like this is at the expanse of the raceline. The main arguement for changing it was the fact that oils could be put on the ramp, blocking the way. However, even Phat Slug (one of the slowest cars, if not slowest) can make the ramp with an oil on it. The arguement can be made that it is different when the lobbies consist of 16 players, and the ramp can also be blocked. However, it still hinders the racing line in my view, and it leaves me wondering if this is an edition of the track for 16 player pick-up lobbies (for which there are a lot of visual improvements), or if it's meant to be a better version of the track. Why do I say that the original ramp was better under normal racing circumstances? In the previous version, I found the turn to be the most fun aspect of the track. You could ride the outside wall, gain momentum on the banking, and turn onto the ramp with great acceleration. This was not only fun, but it was also on par with other lines in terms of pace (if not actually faster). In the redux version, the turn is much more boring: you actually have to take the inside line, because you'll lose time by doing the more unique thing (which is what makes this track stand out for me).

Comparison Note: no sound on the video

2. The Jump before the House

The next noticeable difference is right after the previous one. It's a jump that once used to be sharp, which has now been made a lot smoother. This is one of those changes about the raceline that I can get behind. This ramp was really hard to do with some cars, and a lot easier with others. That meant significant changes in terms of the pace there, and could have really hurt someone's race. I believe now cars will be more equal there, which can make competition more fun.

3. The Jump back into the Skating Park

The third visible alteration comes in the form of another ramp, which is the one that leads us back into the skatepark. It also used to be too steep for a few cars. However, I have mixed feelings about this one, since the steep ramp was fairly easy to circumvent. Nonetheless, it's nice to have a simpler way now, even if I feel it was a fair challenge before.

4. The Fence on the exit of the Dirt

The last big raceline modification is an added fence. This one definitely feels the weirdest of all these. I haven't seen any complaints regarding the last turn out of the dirt, and it was a cool shortcut between the small rocks and the grass, which also took some risk. My best guess at the moment is that it was not an intentional shortcut, rather a slip-up in the track design that made it possible to go that way. Since I have no idea why the fence was added, I feel like I don't have enough information to say a definitive opinion on it. Of course, other than the fact that it is a strange revision.

My last talking point in this article will be pick-ups. In my view, this was an aspect that didn't need fixing, and I definitely felt that any changes were for the worse. I am sorry that I didn't provide any feedback on this, I did see the message in the #tracks channel, but I was also working on my own track. My main concern about the pick-ups is this: there used to be a lot of them right after the start, now there's only 1. This means that whoever gets it already has a competitive advantage, since it has a high chance of being a good pick-up. During our first (!) test run, Stingox already demonstrated this. He got a good start (good acceleration with Humma), grabbed the pick-up and got a zap. I'd argue that there should be more pick-ups, since that way, people good either get a battery and get through that zap, or still shoot the other player, costing them significant time.

It's really late in my timezone now, but I hope that I can still summarize the article well, and get my point through. Despite all the criticism said in this piece of writing, zorbah did an amazing job at making this redux - he actually listened to feedback, set out a goal, and he definitely outdid all that was suggested. However, communities will always be split on subjective issues. What I basically mean is that I really appreciate what he'd accomplished; I just disagreed with the goal.